On Saturday, March 2 at the Albany Cathedral of All Saints, a native son came home. Dr. Adolphus Hailstork, who began his musical career as a chorister of the Cathedral Choir of Men and Boys, came back to Albany to hear local performers play his works, at the place where it all began. He was clearly moved by the performances and by being back in the Cathedral. Mid-concert, he gave a riveting presentation about his life work and the influence that Albany and the Cathedral had on him. He said, “I left the Cathedral, but the Cathedral never left me.” He said that he didn’t write left-brain music, but went against musical trends and wrote music for the heart. He credited AGO for its influence, especially for his being commissioned to compose for regional and national AGO conventions.

U.S. Representative Paul Tonko presented Dr. Hailstork with a Proclamation of the House of Representatives, honoring him and listing some of his many accomplishments as a leading composer of classical music, whose compositions have been performed by major symphony orchestras throughout the U.S. and abroad. The House Proclamation also credited the AGO with its influence on Dr. Hailstork and on society as a whole.

Five Albany organists, Trevor Kahlbaugh, Brian Gurley, Alfred Fedak, Mary Bonn, and William Douglas, admirably performed compositions by Dr. Adolphus Hailstork, to the great enjoyment of Dr. Hailstork and all present. Many of the pieces performed in the concert were spirituals, some touched with jazz, from lightly nuanced solo voice sections to intricate, highly textured full organ sections – from meditative phrases to phrases that seemed to shout, “Victory!” 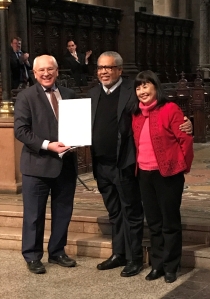 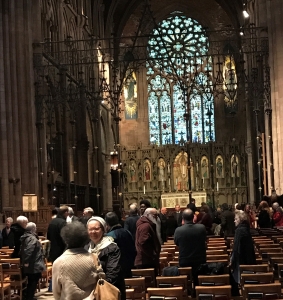 Above: Organists in attendance with Carol (standing at the console)

Above: Attendees with Carol

Above: Carol Williams and Al Fedak